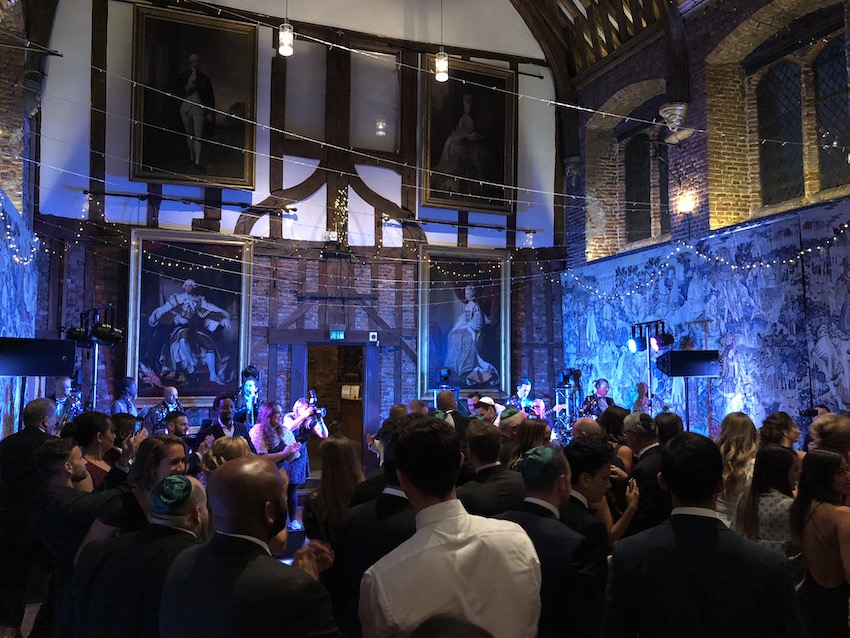 On 14th October 2018 Ambassador Band were booked to perform at the Jewish wedding of Paula and Ben, at the very beautiful Hatfield House in Hertfordshire. This venue is amazing and has a large banqueting hall where the ceremony, dinner and evening party takes place. The venue once belonged to Queen Elizabeth I and boasts many original featured including brickwork and paintings.
Both bride and groom originally stated that they wanted an amazing band that could cover all the party music they liked, as well as Israeli dancing music. They also wanted a band that had a bit of an edge to them, were styled well and really knew how to bring the party atmosphere to their wedding night. Paul and ben said that this why they choose Ambassador band. Please see below the testimonial that Paula and Ben sent us 2 days after their wedding:-

“One word, amazing! I can’t recommend this band enough for a wedding, or any fun event! I picked Ambassador band for our wedding in October after having researched over 10 different bands. I knew straight away they were the right ones, as not only are they far more reasonably priced than other bands, their range of music is incredible and also their styling is awesome, something equally as important to us. Not only that but the band leader, Geoff was extremely quick to reply to ALL of my questions and was super lovely from the get go. Our friends and family were equally as impressed with them – their energy and vibes kept everyone having a fantastic time throughout the night. Big shout out also to Adam & Kadija, the singers on the night – absolutely amazing voices Thanks so much guys 🙂 x”

Both Paula and Ben and their families were a delight to work with and such lovely people. Both sets of parents personally came to see us after we had performed and thanked us for “a truly outstanding performance”.
In the lead up to the wedding Paula was our main point of contact and knew exactly what she wanted both visually and musically from the outset. Once she had gave us her brief, we were trusted and left to get on with it – and we delivered as always.

Beyond the evening entertainment we were also asked to provide music in the Chuppah ceremony and the drinks reception. Our specialists Yair and Stephen took charge of this and made sure everything was perfect in these area. The duo was made up of keyboards and clarinet with Yair also singing the Jewish sections in Hebrew. They performed as guests arrive for the ceremony, entrance music for the bride and entrance music for the groom. Music while signing the register and then Simcha (celebration music) for the smashing of the glass and as the bride, groom and guests departed for the drinks reception.

We had performed at Hatfield House before so we were familiar with the usual set up at the venue. Paula and Ben did however ask if we could set 2 stages up instead of just one and have half the band on one side and the other half on the other side. The reason for this was to have the band play long ways into the room and still leave a walkway between the main hall and the bar area/room behind the band. We agreed and said we could make it work – which we did and it looked fantastic.  We also provided the checker dance floor, full L-Acoustics sounds system, stage/dance floor lighting and 12 uplighters for around the sides of the room to highlight the venues beautiful architecture

For our live repertoire selection we asked Paula and Ben to send us a list of their favourite songs and we built the set list from there. Their first dance was You’re my best Friend by Queen and we arranged this to include a brass line. It was indeed and amazing first dance choice and set list and had the dance floor bouncing from the minute we started performing until the last note we played at the end of the evening.

We were asked to play a set of Israeli dancing music to welcome the bride and groom back into the banqueting hall for dinner and the evening celebrations. We than carried on performing between course followed by a longer set to end the night. Here is the list of all the songs we performed on the evening of Paul and Bens wedding:- 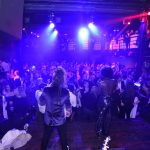 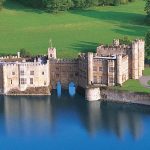 We are here to help!

To book the band or to discuss your live event please contact us and we will happily discuss your requirements.